When we discuss the comparison between Canon and Nikon DSLR Cameras which one is better between dslr camera Canon or Nikon dslr? Many of us have come to the conclusion that Nikon’s better and fewer cameras say that Canon’s dslr camera is better, I think they’re both the best, it’s just the problem who’s using it, well it’s fine before we conclude it let’s discuss it thorough review especially between dslr Canon Rebel T3i vs. Nikon D5200 camera. 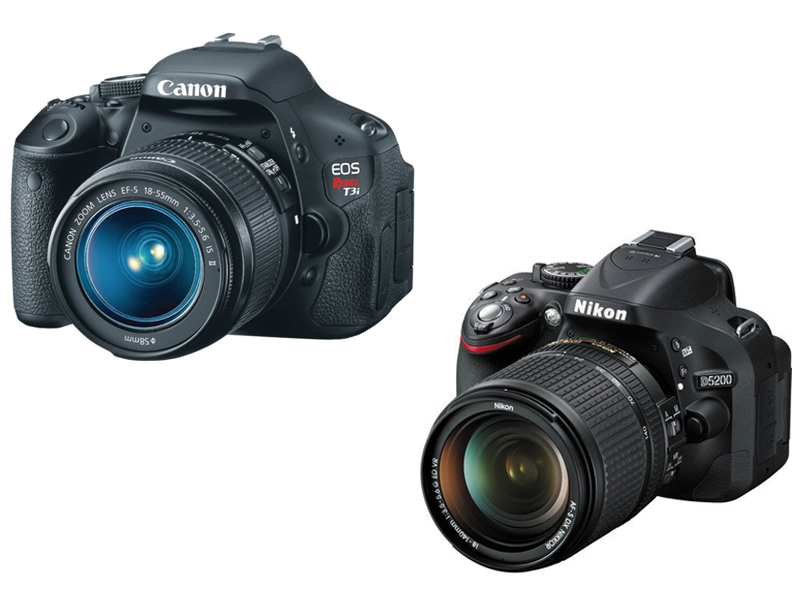 Canon Rebel T3i
The latest model in Canon’s popular Rebel series is very much the camera that the range’s history leads us to expect: well featured, well-designed and competitively priced. It’s a very conventional camera in a part of the market that is seeing some interesting innovations, but the conventional DSLR design still best suits many people’s needs, especially when it’s done this convincingly. The EOS Rebel T3i has an 18.0 Megapixel CMOS (Complementary Metal Oxide Semiconductor) sensor that captures images with exceptional clarity and tonal range and offers more than enough resolution for big enlargements or crops. This first-class sensor features many of the same new technologies as used by professional Canon cameras to maximize each pixel’s light-gathering efficiency. Its APS-C size sensor creates an effective 1.6x field of view (compared to 35mm format).  (See also: Canon SL1 vs. T3i)

Nikon D5200
The Nikon D5200 is 24MP camera with a solid performer that delivers excellent image quality and impressive high-ISO performance, along with an articulated screen and a control interface that’s appropriate for users stepping up to a DSLR. The Nikon D5200 is exactly that type of camera—an exceptional HD-SLR designed to draw exciting new perspectives out of everyone who shoots it. Optimized for creativity, streamlined for flexibility, it’ll awaken your passion and inspire some of the most spectacular photos and videos you’ve ever captured. Creativity and flexibility were considered in every aspect of the D5200. For shots that have both very dark and very bright areas, D5200 includes built-in HDR (high-dynamic range). It takes two shots at different exposures and blends them into one amazing image. And an exciting collection of built-in effects and filters opens new possibilities for expression: isolate a single color, explore black & white, posterize, miniaturize—the creative techniques pros spend years mastering are now conveniently at your command.

Conclusion
In many aspects, these two interesting cameras offer similar features, in price and in technicalities, and this decision is up to each one of us, and above all we have to feel it in our hands to have a tangible appreciation for one over the other. If you want a camera with a lot of megapixels that will bring you extremely high resolution and tons of automatic focus points, then the Nikon D5200 model is a clear winner. However, if you’re attracted by a touch screen and a hybrid autofocus system, then Canon Rebel T5i is your choice.