Some people may prefer still pictures but for some others, video will give a different experience for personal documentation or for mass viewing. Smartphones in general are already capable for both applications but camcorder will come in handy if you will be recording longer videos. You don’t need to spend much because models like Canon Vixia HF R800 Vs Sony HDR CX405 are very affordable and ideal for casual users. For those interested, go check our article below.

Smartphones nowadays are amazing, they can capture high quality images, videos, recording beautiful scenes in better details, as well as offering the versatility of instant sharing, moreover when combined with various available editing apps. Camcorders may sound outdated but they are still a very versatile and convenient option for video recording thanks to some of its upper hands against our compact smart devices. A camcorder will most likely record longer which is first and then second, they may have wider zoom range for better experience.

What’s more important in a camera; be it camcorder or those made prominently to capture still images is not the image quality itself. There are various factors that affect the overall image quality but first thing first, we can have a guess on how they look based on the resolution. HD cameras were everything back then or a decade ago but today, 4K is more like the new standard and even our smartphone can already capture this high-resolution image.

4K are also getting cheaper as new products enter the market but if you will be viewing on a smaller screen such as a computer or laptop and regular TV sizes, 1080p or HD are still good enough with a great benefit on being cheaper. Besides the video resolution, the sensor they come with will also play an important role on how the image quality appears because overall a bigger sensor will be better in capturing light. Professional models like Canon XA50 Vs XA40 have big sensors but they are expensive as well.

Features will decide if these camcorders will offer the best convenience or not. One feature we always seek when checking out new camcorders is their zooming range because this is what makes the unit interesting for many users compared to their smart device. Entry-level models with affordable price may have small sensors and mediocre image quality but it lets them have a long zooming lens which makes the camera an ideal companion if you will be traveling or recording and capturing subjects far away.

If the camcorder is meant for professional use, the feature we are looking for in the unit is usually the manual controls because they will give you versatility to be as creative as you want during different recording situations. Professional models usually have various external accessories ports as well to improve the recording application such as XLR jack to enhance the audio quality and dual memory slots to expand their storing.

If you have already decided to get a camcorder, now is the time to see what the market has to offer because there are so many of them out there and not all will be ideal for your application. But, if you are here then it means what you look for is an affordable camcorder, something entry-level and will be great for casual shooting such as at a family event, while travelling, or to record your YouTube video content like tutorials or song cover. 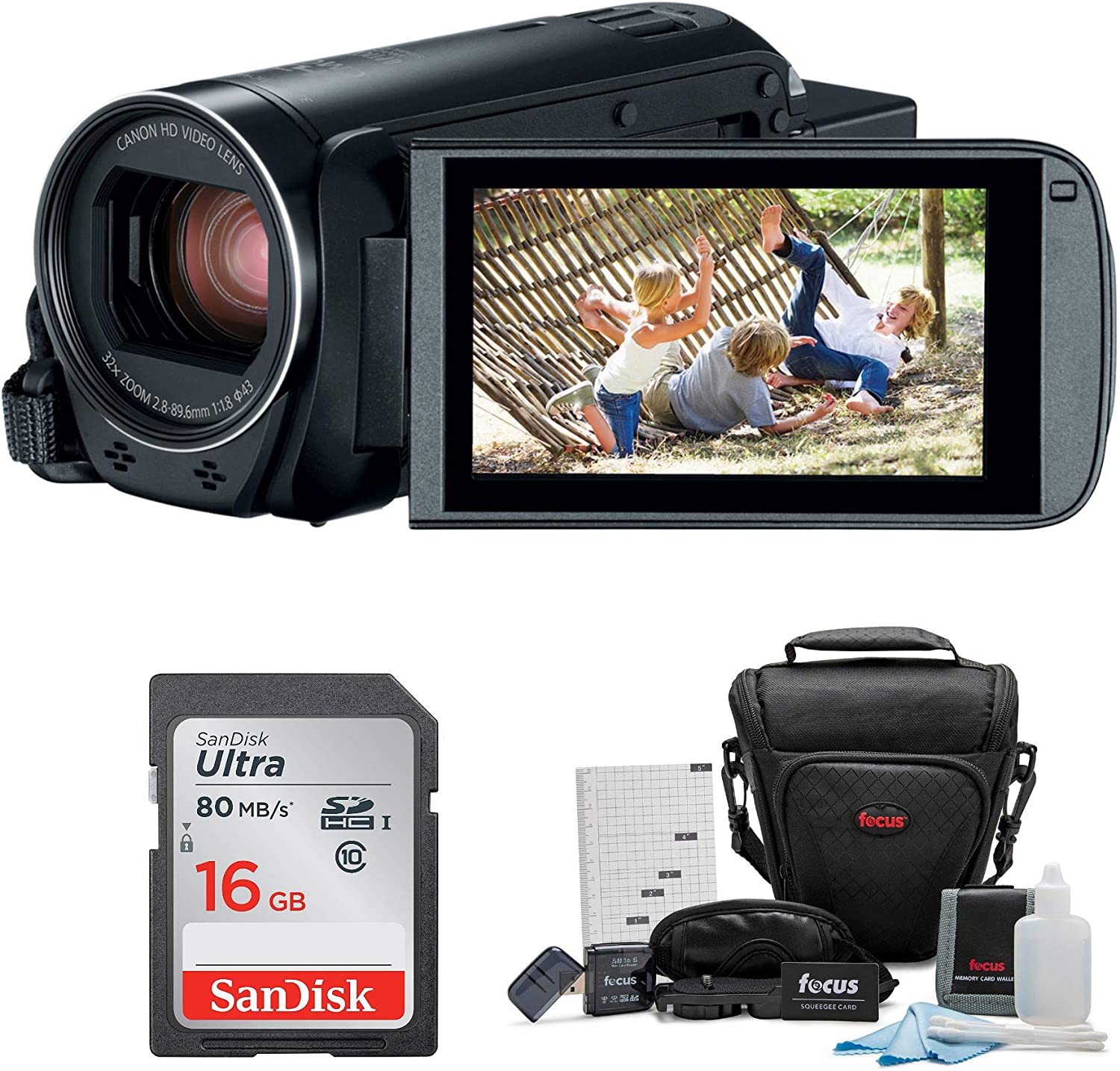 As people are more interested in 4K, the best thing about camcorder options today is that you will find lots of great HD models in a very affordable price range. They are not as popular as they used to be but manufacturers still have some of them which are prominently aimed at beginner, content maker, or just any casual users. Talking about camcorders, two companies that come instantly to our mind are Canon and Sony which have been well-known in camera and overall its technology.

They have best-selling high-end cameras both for still images enthusiast and videographer but they still have a lot of entry-level models for budget shoppers and if this sounds like what you aim to, Canon Vixia HF R800 and HDR CX405 will be a very ideal choices to consider. They do have similar price points around $200 and have similar qualities or technologies used in camcorder in this level. More than anything, we do think that these models are convenient and easy to use without much fuss.

One of our favorite points of camcorders both in entry level or mid-range is their user experience. They may not come with any fancy features or superb image/video quality but holding a camcorder is much more comfortable than holding a smartphone especially when they are not mounted in a certain type of tripod. Canon Vixia HF R800 and HDR CX405 will shine the most in compact size, decent videos, as well as convenient features and ease of use yet, there is also no impressive thing or feature in both of them.

As you can see from the sample picture above, these camcorders are fairly similar to each other in general but not exactly the same in detail. The prominent difference is probably on how they install the battery as you can see it clearly in HF R800 located in the back and big enough to notice directly as it is installed externally. CX405 has the battery slot at the back as well but inside the body and concealed with a cap thus it is not visible.

Canon is measured approximately 2.1-inch wide, 2.3-inch tall, and 4.6-inch in depth while weighing at 10.8 oz. including the battery compared to Sony at 2.2-inch wide, 2.3-inch tall, and 5.1-inch deep, weighing at 7.6 oz. with the supplied battery. They equally have folding displays but Canon is wider in comparison at 3-inch than Sony at 2.7-inch. CX405’s LCD is also not touch-sensitive so we have to use the button and physical control to navigate the camcorder’s menu.

Moving forwards, now let’s see what Canon Vixia HF R800 and Sony HDR CX405 can offer and starting with their camera specification, both of them are equally coming with a small sensor; 1/4.8-inch CMOS and 1/5.8-inch backlit CMOS sensor respectively. This small sensor is very common in entry-level cameras and camcorders but these two also have less pixels to work with by only offering approximately 2MP and 2.2MP for the video mode when similarly used in 16:9 factor. The focal length itself is 2.8-89.6 mm compared to 1.9-57.0 mm.

No matter how good a camera sounds like, their video or image result will be the most important to decide which will fit your preference better. These cameras thankfully have a decent video quality and they are actually very comparable to each other with similar image quality. They have pretty good details but can be overexposed on parts with more lighting than the rest so you will not see plenty of details here. Sony especially can be slower when the subject in front of the lens is darker than its background.

Side by side, they are both great for indoor filming because everything still seems very good even with standard lighting making them ideal for self-filming such as for YouTube content creators. For outdoor filming, in our opinion the Vixia HF R800 gives a more satisfying video result especially for the color appearance because it tends to produce livelier results and have a better dynamic range. Comparing the two you may see how colors appear darker in HDR CX405 but it may seem more natural for some people.

As for the audio quality, Canon Vixia HF R800 and Sony HDR CX405 are very good and we don’t think there is any problem using the built-in microphone in both cameras for outdoor or indoor shooting. They are sharp and you can hear little details in the background as well but depending on your choice, we personally more comfortable with Sony as the highs are a little bit dampened. Zoom range is from 32x to 1140x digitally and from 30x to 350x digitally respectively.

The last part we want to mention is the feature collections in Canon Vixia HF R800 and Sony HDR CX405 and on this point both of them are offering various options such as Canon with its slow and fast recording mode and Sony with its motion shot video. Our favorite is Dual Record mode in Sony for it allows you to record and capture still images at the same time, making it convenient and useful so we don’t have to do much with the computer later.

If you are starting a channel or need a dedicated camera to record a video, Canon Vixia HF R800 and Sony HDR CX405 will be a very ideal choice. They have a good image quality, decent video shooting and result for HD resolution but in comparison we do think Canon produces livelier footage and has overall better color than Sony. They can zoom fast and smoothly but Canon will give you further zooms yet, the highest it gets, the less useful the footage. Feature wise Sony has many to offer in terms of convenience.

You can go with any of these cameras and still be satisfied with the result but if we are to choose, we do like the video result of Canon Vixia HF R800 more because it seems better and pleasant to the eyes.