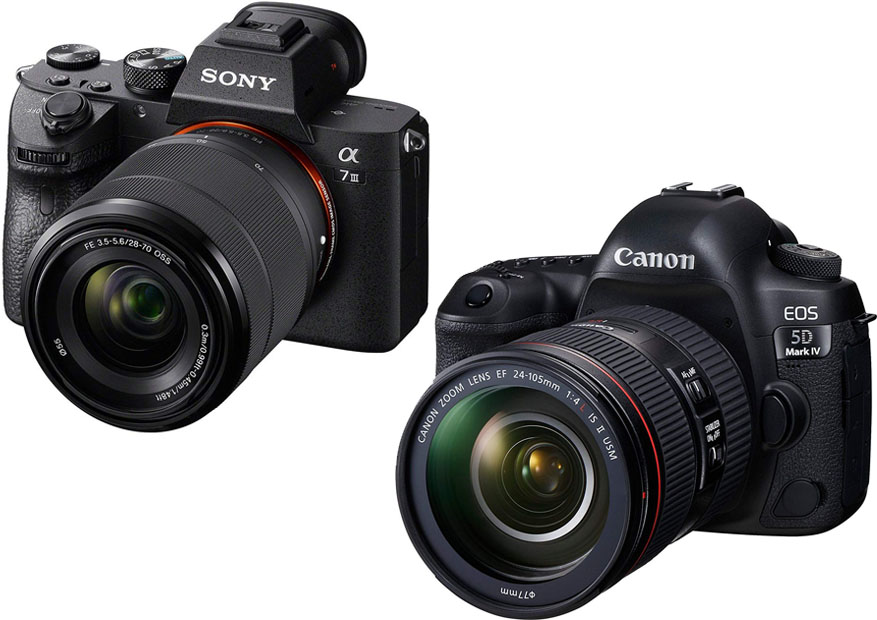 Continue reading below to learn more about:
– The size, weight, and portability of each model
– The battery life of each model
– Which one that has a better viewfinder and display screen
– The AF performance of Sony A7 III vs Canon 5D Mark IV
– The continuous shooting performance of each camera
– The image sensor of each camera
– The comparison of their video quality
– Whether you should choose Sony A7 III or Canon 5D Mark IV

Size and Weight
First of all, let’s compare the dimensions of these two mirrorless cameras. They both are solid and well-built. Their bodies are really durable. They are also weather-sealed, so they are ready for the outdoors. These cameras can withstand various environmental factors. See also: Nikon D850 vs Canon 5D Mark IV.

However, Sony A7 III is significantly more compact and lightweight. This model measures only 127 mm x 96 mm x 74 mm. The weight is approximately 650 grams without any lens. The compact, lightweight body makes it very portable and easy to hold. However, the smaller size is actually due to the smaller battery.

Meanwhile, Canon 5D Mark IV measures 151 mm x 116 mm x 76 mm and weighs about 890 grams. This camera is considerably bigger and heavier. Well, if you don’t mind the bulky dimensions, this camera is still great. The grip feels solid and sturdy. The larger size is because this camera comes with a larger battery.

Battery Life
Sony A7 III has a decent battery capacity. It can last for about 610 shots per charge. This isn’t bad. But any increase in battery life is always something to be appreciated, especially when you are going on a trip.

Canon 5D Mark IV has a larger battery which can last for about 900 shots per charge. Indeed, the battery life is significantly longer. So, if you want a camera that can last for a long time while you are adventuring in the wilderness, this model is a great choice.

Sony A7 III has a 3.0-inch tilting display screen. This is a great benefit. You can adjust the position of the display when you need to shoot from a difficult angle. It allows you to work with a complex composition easily. The display resolution is 922k dots.

Canon 5D Mark IV has a larger display screen with a higher resolution, but it is a fixed display. It measures 3.2 inches, and the resolution is 1,620k dots. So, although the display quality is better, it won’t be as flexible and versatile when shooting from a difficult angle.

Autofocus and Continuous Shooting
Sony A7 III vs Canon 5D Mark IV are both great in the AF tracking mode. They can track photo subjects very well. They can be fast and accurate. However, there are notable differences in the one shot mode.

Sony A7 III is somewhat slower in the one shot mode. This is because the AF needs to re-focus in order to obtain focus. Nevertheless, this is quite compensated by the numerous focus points. Sony A7 III has a total of 693 focus points which allow the camera to focus quickly and accurately. 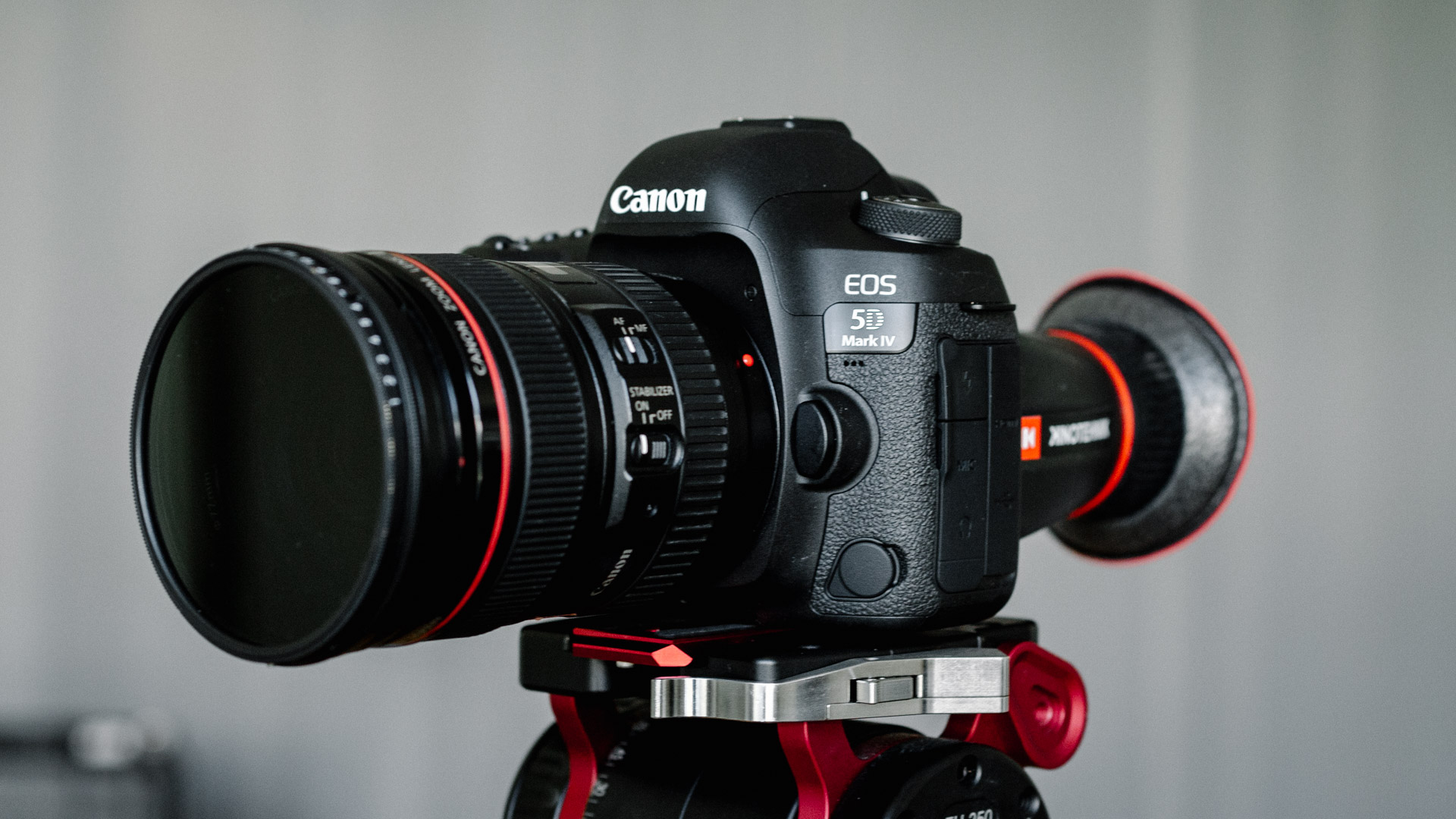 Furthermore, Sony A7 III has a higher continuous shooting speed. It can shoot at 10 fps. So, it is a great choice for shooting moving subjects and fast actions.

Canon 5D Mark IV is also an awesome beast. The AF system is really fast. One reason is that it can keep its focus every after a shutter click. It has 61 focus points. The continuous shooting performance is fine; it can shoot at 7 fps.

Image Sensor
Most beginners may frown upon find out that Sony A7 III has a lower sensor resolution than Canon 5D Mark IV. The image sensor of Sony A7 III is 24 MP. However, note that this camera doesn’t have an AA filter, so the sharpness and detail can be really great. In addition, it supports a wider ISO range, 100 – 51,200 (expandable to 50 – 204,800), and the low-light performance is considerably better.

On the other hand, Canon 5D Mark IV has a 30 MP image sensor. The high resolution is beneficial if you need to print large-sized images or if you need pictures with high crop-resistance. This camera offers better moire control, thanks to the AA filter. However, the ISO range is only 100 – 25,600, expandable to 50 – 102,400. The low-light performance is not as good.

Video Recording
Both cameras here offer 4K video recording. Sony A7 III actually records videos in 3840 x 2160 pixels. But it still has a big distinctive advantage that can greatly help those who record videos without a tripod, which is the built-in image stabilization. Sony A7 III can shoot images and videos with superior sharpness and clarity. The built-in image stabilization is really effective for eliminating blurs.

Canon 5D Mark IV records videos in the actual 4K (4096 x 2160 pixels). In addition, it has the 4K photo mode and timelapse recording. However, it doesn’t have built-in image stabilization, so you may want to shoot with a tripod in order to get satisfying results.

Conclusion
In general, Sony A7 III is more recommended. This is a more compact and lightweight camera with excellent build quality. It has several distinctive advantages, such as the tilting display screen, numerous focus points, higher continuous shooting speed, and better overall image quality. In addition, it has built-in image stabilization which is really useful for eliminating blurs when shooting without a tripod.